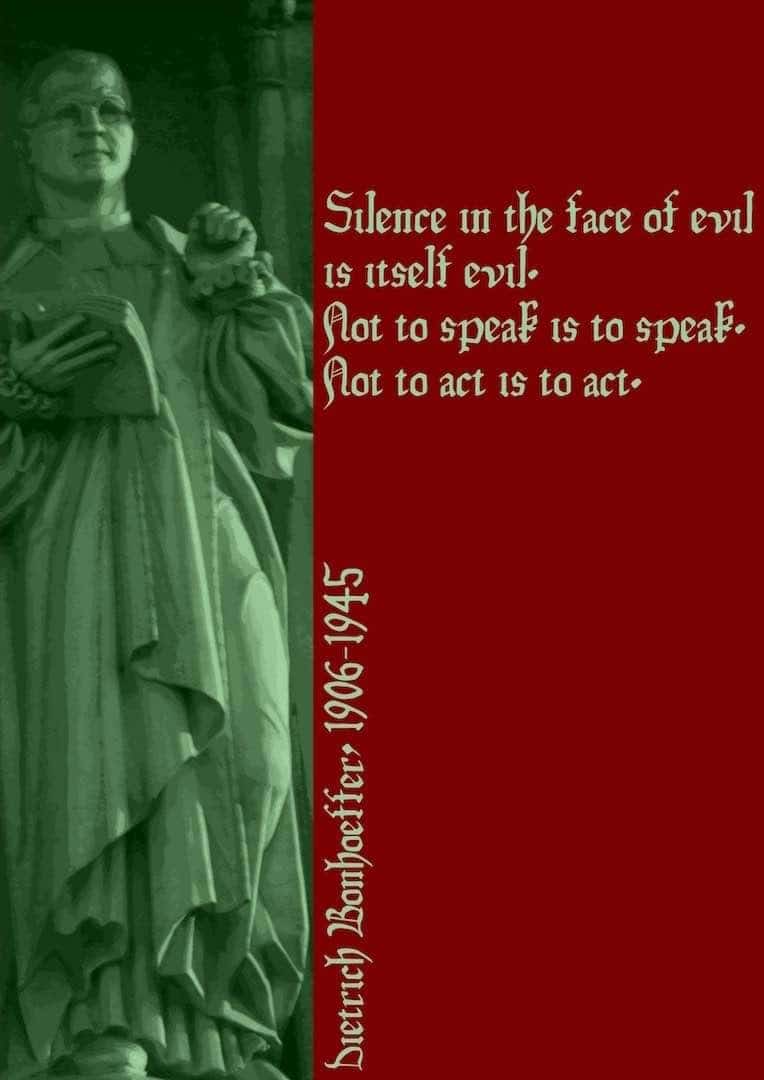 Bonhoeffer in prison at Tegel

Letters and Papers from Prison Quotes by Dietrich Bonhoeffer

Limited but effective living together.

Some privileges but few illusions.

When after a few days Bonhoeffer’s family relations were realized, his situation in prison at Tegel is improved. He gets a more spacious cell, more abundant rations he refuses in sympathy with other prisoners, a daily walk with the captain of the prison.
Bonhoeffer notes the obsequiousness of those who insulted him just before :  I was none the less shameful for the others, it was painful.
He evokes, with some humor, the visiting by his uncle Paul 1.
He can receive visits, parcels, books. He write mail, sometimes uncensored. He spends time in the infirmary not only to be looked after, but to help, after the bombing of the end of November 1943 on Borsig.

The plight of the prisoners

Bonhoeffer is allowed to make a report about the disastrous situation in which the prisoners were left:
A rocket exploded twenty-five meters from here; the windows popped; the infirmary was deprived of light; except us, who were there, nobody took care of the prisoners who called for help; but we were not very effective in the dark.
In this story, I show the need to take sanitary measures during alarms. I hope to get something, because I would be happy to be helpful in any way by going and seeing the competent service.

He happens to have friendly talks, discussions :
Inmates working in the kitchen or out in the afternoon send to one another the news that I am in the infirmary and they then find some pretext to come upstairs, because they have pleasure to talk with me. This is of course not allowed, but I had the pleasure to learn it. »

He is sometimes even treated with some consideration:
The officer, who brought me back to my cell, told me while saying goodbye, with an embarrassed smile : « … Pray therefore, Mr. Pastor, so that we do not have alarm today.
And he knows how to be respected, even by those who do not want to.

Some highlights provide him great happiness : a one to one interview with Eberhardt Bethge, beyond the normal time
Your visit continues to support me constantly. So many things we have discussed and learned from each other during those ninety minutes ! I thank you for having managed to obtain this permission.

Fighting for his life and that of others

He wages a constantly renewed fight to preserve his life and not to compromise that of others, especially that of his brother-in-law Hans Dohnanyi, also arrested April 5, 1943 and seriously ill.

Roeder would at first have liked to get my head, now he has to settle for a ridiculous accusation, which will earn him little fame.
In recent days, I was back in town (for interrogation) once or twice with a very satisfactory result! But as the issue of delay remains unanswered, I basically stop being interested in my case.

Between resistance and submission

Hence the following position … whose outcome leaves no doubt. Bonhoeffer will never be inclined to side with the cowards :
I am often concerned to know where is the line between the necessary resistance against the “fate” and submission. Don Quixote is the symbol of stubbornness in the resistance to the absurd, even to madness. Sancho Panza is the representative of those who accommodate deftly and blissfully in a given situation. Faith requires this flexible and lively attitude. This is the only way we can bear and make fruitful every situation that happens to us.

On the enemy’s side

Thus his living environment demonstrates the one he describes in Living Together. Not the loneliness of a cloister, but the very enemy camp.
They allow him neither a chaplain nor a worship in a visible Christian community, but this is how he lives this situation:
Christian brotherhood is not a human ideal but a reality given by God; it is spiritual and not psychic … It is a reality created by God to which we are permitted to partake.

1 General von Hase, the fortress commander of Berlin. Sentenced to death and executed for his taking part in the conspiracy against Hitler.
2 Roeder, advisor at the military tribunal, head of the lawsuit investigation

The Apostles’ Creed, a creed of the ancient Church